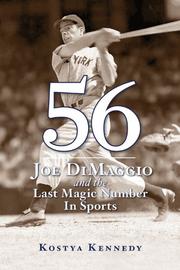 Joe DiMaggio and the Last Magic Number in Sports

Sports Illustrated senior editor Kennedy follows the days of Joe DiMaggio’s immortal hitting streak, evoking the mood of a long-gone America to which DiMaggio was a central figure.

“Baseball’s most resonant numbers keep falling,” he writes. “But Joe DiMaggio’s is still there: 56 consecutive games with a hit.” The streak began on May 15, 1941, and ended 57 games later when DiMaggio went hitless in Cleveland. A “biting strangeness” seemed to envelop America during these spring and summer months, as the country inched ever closer to war, and young men, including professional baseball players, entered the military in increasing numbers via the draft. As the streak unwound, DiMaggio offered not only escape from harsh reality but certainty in uncertain times. However, it was not easy being Italian in America at the time, and more than a few newspapers referred to DiMaggio as “the Wallopin’ Wop.” Always a hero to kids in Queens, once the streak seemed to stretch on forever, DiMaggio truly became “America’s Joe,” gaining uncommon celebrity and adulation. Kennedy creates a dynamic portrait of the young star as he tried to keep the streak alive. Elegant both on and off the field, DiMaggio remained somehow distanced and detached, and the author draws precise character sketches of those closest to him at that time: his wife Dorothy, pregnant with their first child, and his brother, and Red Sox rival, Dom. Kennedy also brings to life such characters as diminutive rookie Phil Rizzuto and DiMaggio’s closest friend, Lefty Gomez. DiMaggio emerges in these pages as a flawed hero, but a hero nonetheless. How unique was the streak? “Through the end of the 2010 season,” writes the author, “17,290 players were known to have appeared in the major leagues. Only one of them had ever hit in 56 straight games.”

A fine baseball book and an expert social history.