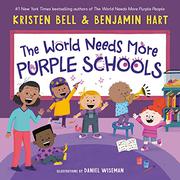 From the My Purple World series

A color-themed vision of what school should be like.

In what amounts to a rehash of The World Needs More Purple People (2020), Bell and Hart address adult as well as young readers to explain what “curious and kind you” can do to make school, or for that matter the universe, a better place. Again culminating in the vague but familiar “JUST. BE. YOU!” the program remains much the same—including asking questions both “universe-sized” (“Could you make a burrito larger than a garbage truck?”) and “smaller, people-sized” (i.e., personal), working hard to learn and make things, offering praise and encouragement, speaking up and out, laughing together, and listening to others. In the illustrations, light-skinned, blond-haired narrator Penny poses amid a busy, open-mouthed, diverse cast that includes a child wearing a hijab and one who uses a wheelchair. Wiseman opts to show fewer grown-ups here, but the children are the same as in the earlier book, and a scene showing two figures blowing chocolate milk out of their noses essentially recycles a visual joke from the previous outing. (This book was reviewed digitally.)

The message is worthy, but this phoned-in follow-up doesn’t add anything significant.