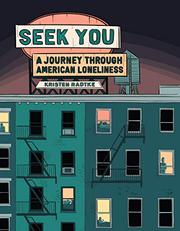 A Journey Through American Loneliness

An exploration of loneliness, the troubling ways we’ve studied it, and the subtle ways we strain to avoid it.

Radtke’s second graphic memoir feels almost custom-made for the social-distancing era: She explores our need for connection and touch (“skin hunger” is the psychological term) and the negative social and personal effects of isolation. But the book is a much broader and deeply affecting study of loneliness, uncovering the host of ways our craving for community manifests itself in ways that are sometimes quirky and sometimes terrifying. Laugh tracks on sitcoms, for instance, offer a sense of communal feeling within a cold medium; so, too, did the Web 1.0 sites and chatrooms Radtke obsessed over, where strangers laid out their private thoughts and fears. The anxiety runs deep: We crave reports of mass shooters that say the perpetrator was a loner because it satisfies our need to not associate with them. “The collective branding of mass killers is a clumsy act of self-preservation,” she writes. In clean, graceful renderings and a constricted color palette, Radtke expresses her own experiences with loneliness, as a child and in relationships, and gets people to open up about theirs. Along the way, she discovered unusual approaches to combatting loneliness—e.g., a hotline that elderly people can call to have someone to talk to. The author also writes about the cruel experiments psychologist Harry Harlow conducted on monkeys in the 1950s to debunk the belief that children shouldn’t be emotionally coddled. Harlow himself lived a troubled, isolated life, and Radtke wonders if he projected his anxiety upon the animals he tormented in the name of science. If so, how much of our own fear of isolation do we project on the world? Throughout, Radtke is an engaging and thoughtful guide through our fear of being alone.

Superb. A rigorous, vulnerable book on a subject that is too often neglected.