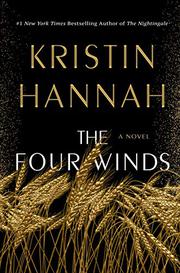 The miseries of the Depression and Dust Bowl years shape the destiny of a Texas family.

“Hope is a coin I carry: an American penny, given to me by a man I came to love. There were times in my journey when I felt as if that penny and the hope it represented were the only things that kept me going.” We meet Elsa Wolcott in Dalhart, Texas, in 1921, on the eve of her 25th birthday, and wind up with her in California in 1936 in a saga of almost unrelieved woe. Despised by her shallow parents and sisters for being sickly and unattractive—“too tall, too thin, too pale, too unsure of herself”—Elsa escapes their cruelty when a single night of abandon leads to pregnancy and forced marriage to the son of Italian immigrant farmers. Though she finds some joy working the land, tending the animals, and learning her way around Mama Rose's kitchen, her marriage is never happy, the pleasures of early motherhood are brief, and soon the disastrous droughts of the 1930s drive all the farmers of the area to despair and starvation. Elsa's search for a better life for her children takes them out west to California, where things turn out to be even worse. While she never overcomes her low self-esteem about her looks, Elsa displays an iron core of character and courage as she faces dust storms, floods, hunger riots, homelessness, poverty, the misery of migrant labor, bigotry, union busting, violent goons, and more. The pedantic aims of the novel are hard to ignore as Hannah embodies her history lesson in what feels like a series of sepia-toned postcards depicting melodramatic scenes and clichéd emotions.

For devoted Hannah fans in search of a good cry.