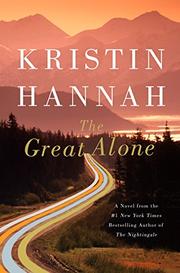 In 1974, a troubled Vietnam vet inherits a house from a fallen comrade and moves his family to Alaska.

After years as a prisoner of war, Ernt Allbright returned home to his wife, Cora, and daughter, Leni, a violent, difficult, restless man. The family moved so frequently that 13-year-old Leni went to five schools in four years. But when they move to Alaska, still very wild and sparsely populated, Ernt finds a landscape as raw as he is. As Leni soon realizes, “Everyone up here had two stories: the life before and the life now. If you wanted to pray to a weirdo god or live in a school bus or marry a goose, no one in Alaska was going to say crap to you.” There are many great things about this book—one of them is its constant stream of memorably formulated insights about Alaska. Another key example is delivered by Large Marge, a former prosecutor in Washington, D.C., who now runs the general store for the community of around 30 brave souls who live in Kaneq year-round. As she cautions the Allbrights, “Alaska herself can be Sleeping Beauty one minute and a bitch with a sawed-off shotgun the next. There’s a saying: Up here you can make one mistake. The second one will kill you.” Hannah’s (The Nightingale, 2015, etc.) follow-up to her series of blockbuster bestsellers will thrill her fans with its combination of Greek tragedy, Romeo and Juliet–like coming-of-age story, and domestic potboiler. She re-creates in magical detail the lives of Alaska's homesteaders in both of the state's seasons (they really only have two) and is just as specific and authentic in her depiction of the spiritual wounds of post-Vietnam America.