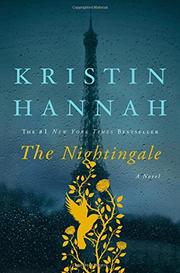 Hannah’s new novel is an homage to the extraordinary courage and endurance of Frenchwomen during World War II.

In 1995, an elderly unnamed widow is moving into an Oregon nursing home on the urging of her controlling son, Julien, a surgeon. This trajectory is interrupted when she receives an invitation to return to France to attend a ceremony honoring passeurs: people who aided the escape of others during the war. Cut to spring, 1940: Viann has said goodbye to husband Antoine, who's off to hold the Maginot line against invading Germans. She returns to tending her small farm, Le Jardin, in the Loire Valley, teaching at the local school and coping with daughter Sophie’s adolescent rebellion. Soon, that world is upended: The Germans march into Paris and refugees flee south, overrunning Viann’s land. Her long-estranged younger sister, Isabelle, who has been kicked out of multiple convent schools, is sent to Le Jardin by Julien, their father in Paris, a drunken, decidedly unpaternal Great War veteran. As the depredations increase in the occupied zone—food rationing, systematic looting, and the billeting of a German officer, Capt. Beck, at Le Jardin—Isabelle’s outspokenness is a liability. She joins the Resistance, volunteering for dangerous duty: shepherding downed Allied airmen across the Pyrenees to Spain. Code-named the Nightingale, Isabelle will rescue many before she's captured. Meanwhile, Viann’s journey from passive to active resistance is less dramatic but no less wrenching. Hannah vividly demonstrates how the Nazis, through starvation, intimidation and barbarity both casual and calculated, demoralized the French, engineering a community collapse that enabled the deportations and deaths of more than 70,000 Jews. Hannah’s proven storytelling skills are ideally suited to depicting such cataclysmic events, but her tendency to sentimentalize undermines the gravitas of this tale.

Still, a respectful and absorbing page-turner.