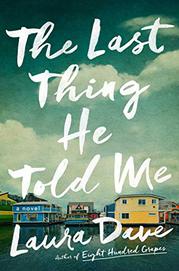 THE LAST THING HE TOLD ME

When a devoted husband and father disappears, his wife and daughter set out to find him.

Hannah Hall is deeply in love with her husband of one year, Owen Michaels. She’s also determined to win over his 16-year-old daughter, Bailey, who has made it very clear that she’s not thrilled with her new stepmother. Despite the drama, the family is mostly a happy one. They live in a lovely houseboat in Sausalito; Hannah is a woodturner whose handmade furniture brings in high-dollar clientele; and Owen works for The Shop, a successful tech firm. Their lives are shattered, however, when Hannah receives a note saying “Protect her” and can’t reach Owen by phone. Then there’s the bag full of cash Bailey finds in her school locker and the shocking news that The Shop’s CEO has been taken into custody. Hannah learns that the FBI has been investigating the firm for about a year regarding some hot new software they took to market before it was fully functional, falsifying their financial statements. Hannah refuses to believe her husband is involved in the fraud, and a U.S. marshal assigned to the case claims Owen isn’t a suspect. Hannah doesn’t know whom to trust, though, and she and Bailey resolve to root out the clues that might lead to Owen. They must also learn to trust one another. Hannah’s narrative alternates past and present, detailing her early days with Owen alongside her current hunt for him, and author Dave throws in a touch of danger and a few surprises. But what really drives the story is the evolving nature of Hannah and Bailey’s relationship, which is by turns poignant and frustrating but always realistic.

Light on suspense but still a solid page-turner.