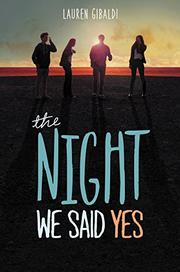 THE NIGHT WE SAID YES

A story of first love lost and possibly found again is told in chapters alternating between the present and a year in the past.

Ella is swept off her feet the summer before her senior year of high school by an earnest, adorable new guy named Matt who’s the new bassist for her friend’s band and who has spent his life moving from place to place due to his father’s job. Over the course of the night they go from introductions to a series of adventures in which they play drinking games atop the rooftop of the high school, go skinny dipping, and make out on stage during the band’s performance. Matt quickly develops a closeness with Ella and her friends Meg and Jake, whose own romance can only be described as tumultuous. A year later, readers find Ella encountering Matt again for the first time since he disappeared and broke her heart, just as she’s looking forward to going off to college. Many teens will identify with the abundance of relationship drama on offer here, even as it unfolds at length among all of the main characters. The dialogue-driven narrative’s straightforwardness serves the time-jump plot device well, helping to keep the audience grounded.

In the end, there are few surprises in this coming-of-age novel, but readers looking for a light but meaningful summer romance will engage with it effortlessly.