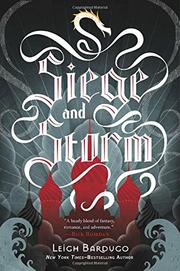 From the Grisha Trilogy series, volume 2

The Grisha Trilogy turns from bildungsroman to political thriller in its second installment.

Sun Summoner Alina and former Ravkan army tracker Mal, once her childhood friend and now her would-be love, are on the run. All they want is to put Ravka and the megalomaniacal Darkling far behind them. Alas, this is not to be. Captured by the Darkling and forced onto a ship captained by the notorious pirate Sturmhond, they find themselves in pursuit of the second of three magical amplifiers that will make Alina powerful beyond belief—and bind her ever-closer to the ancient, evil Darkling. Sturmhond has an unexpected agenda of his own, though, and turns on the Darkling. Darkling temporarily thwarted, Alina and Mal find themselves back in Ravka’s capital as part of the ailing king’s younger son’s attempt to find his way to the throne. Bardugo’s sophomore effort smooths out many of the rookie wrinkles that marred Shadow and Bone (2012); Alina’s wry voice does not interfere with worldbuilding, instead keeping readers immersed in the plot. Characters are rich and complex, particularly the Peter the Great–like younger prince and Alina herself, beset by competing claims and desires. Is she Mal’s lover? Prince Nikolai’s pawn? Commander of the Grisha Second Army? Saint?