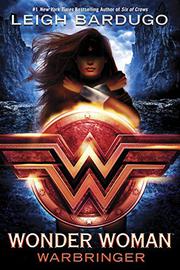 From the DC Icons series

Bardugo introduces readers to Wonder Woman with two alternating perspectives: Diana, princess of Themyscira, and Alia, a 17-year-old New Yorker. While most Amazons are women warriors rewarded with new lives after death, Diana alone is untested, molded from clay, eager to prove herself worthy. Diana’s rescue of Alia from a shipwreck forces the princess into exile in order to prevent a foreordained global catastrophe. Alia wonders if her unusually dressed, oddly naïve rescuer is in a cult. Nerdy, orphaned, biracial, and identifying as black, Alia is awkward and mostly friendless despite her family’s massive wealth. Rescued from disaster by this bronze-skinned white girl who looks “like a supermodel who moonlighted as a cage fighter,” Alia learns her very existence might cause the deaths of millions. With the help of her brother and their two best friends (snarky Brazilian Theo and Indian Nim, who’s queer, fat, fashionable, and fabulous), Alia accompanies Diana on a quest to end the cycle of death. This will absolutely satisfy pre-existing fans of Wonder Woman, but it also readily stands alone for non–superhero fans (although with the first live-action Wonder Woman film opening two months before the novel’s launch, it’s likely to contribute to a new fan base for Diana).

Cinematic battles and a race against time keep the excitement high, but the focus on girls looking out for each other is what makes this tie-in shine. Crossed fingers for a sequel.