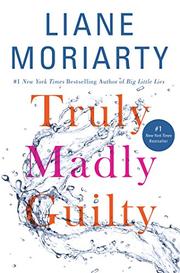 Relying less on comedy or edginess than in previous novels (Big Little Lies, 2014, etc.), Moriarty explores the social and psychological repercussions of a barbecue in Sydney gone terribly awry.

What happened emerges slowly through glimpses of characters coping—or not coping—weeks after the event intercut with an unfolding chronicle of the actual barbecue day. Both past and present are seen through the eyes of those remembering, who have been affected very differently by the events. Leading up to the barbecue, Erika and her husband, Oliver, accountants whose buttoned-up personalities compensate for miserable upbringings (in Erika’s case by a hoarder and in Oliver’s by alcoholics), have invited Erika’s childhood friend Clementine, a cellist preparing for an important audition, her husband, Sam, and two small children, 2-year-old Ruby and 5-year-old Holly, for afternoon tea and are nervously planning to ask Clementine to donate eggs to help them have a baby. Oliver is understandably upset when Erika accepts a spur-of-the-moment invitation from their wealthy, very sociable neighbor, Vid, to bring everyone over to his backyard for a barbecue. But Clementine, who was instinctively dreading Erika’s tea, jumps at the chance for a lively afternoon with Vid, his sexy wife, Tiffany, and their brainy 10-year-old daughter, Dakota. While Dakota watches the smaller girls, the adults proceed to get mildly sloshed. Then Erika, drunk for the first time in her life, screams, and a child ends up in a life-threatening situation. The suspicion and guilt the adults and even children secretly feel in the aftermath cause rifts and secrets to surface within the three marriages and within Erika and Clementine’s friendship. The setup here is reminiscent of fellow Australian novelist Christos Tsiokas’ The Slap (2008), but while Tsiokas uses a minor incident to propel his corrosive examination of middle-class lives, Moriarty’s characters resolve their issues too neatly and with too much comforting ease.

Not one of Moriarty's best outings.