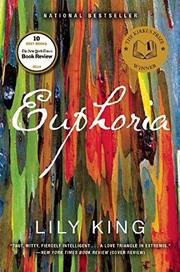 King (Father of the Rain, 2010, etc.) changes the names (and the outcome) in this atmospheric romantic fiction set in New Guinea and clearly based on anthropologist Margaret Mead’s relationship with her second and third husbands, R.F. Fortune and Gregory Bateson—neither a slouch in his own right.

In the early 1930s, Nell and Fen are married anthropologists in New Guinea. American Nell has already published a controversial best-seller about Samoan child-rearing while Australian Fen has published only a monograph on Dobu island sorcery. Their marriage is in trouble: Nell holds Fen responsible for her recent miscarriage; he resents her fame and financial success. Shortly after leaving the Mumbanyo tribe they have been studying (and which Nell has grown to abhor), they run into British anthropologist Bankson, who is researching another tribal village, the Nengai, along the Sepik River. Deeply depressed—he's recently attempted suicide—Bankson is haunted by the deaths of his older brothers and his scientist father’s disappointment in him for practicing what is considered a soft science. Also deeply lonely, Bankson offers to find Nell and Fen an interesting tribe to study to keep them nearby. Soon the couple is happily ensconced with the Tam, whose women surprise Nell with their assertiveness. While the attraction, both physical and intellectual, between Bankson and Nell is obvious, Fen also offers Bankson tender care, which threatens to go beyond friendship, when Bankson falls ill. At first, the three-way connection is uniting and stimulating. But as Nell’s and Bankson’s feelings for each other develop, sexual tensions grow. So do the differences between Fen’s and Nell’s views on the anthropologist’s role. While Bankson increasingly shares Nell’s empathetic approach, Fen plots to retrieve an artifact from the Mumbanyo to cement his career. King does not shy from showing the uncomfortable relationship among all three anthropologists and those they study. Particularly upsetting is the portrait of a Tam who returns “civilized” after working in a copper mine.

A small gem, disturbing and haunting.