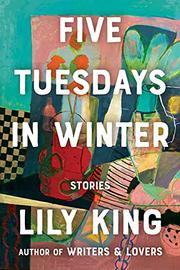 The first collection of stories from an acclaimed novelist.

King, who won the inaugural Kirkus Prize for Fiction for Euphoria (2014), can make you fall in love with a character fast, especially the smart, vulnerable, often painfully self-conscious adolescent protagonists featured in several of the 10 stories collected here, half previously published, half new. In "Creature," the fetching opener, 14-year-old Carol is hired to be a live-in mother's helper by a rich woman whose children and grandchildren are coming for a two-week visit, a woman so entitled she breezily renames her Cara because she likes it better. Under the influence of Jane Eyre, Carol is swept away by the charms of the woman's newly married son, who's arrived without his wife. "You cannot know these blistering feelings," she writes to her friend, "you have not yet met your Rochester." As in Father of the Rain (2010), alcoholism and mental illness shadow many characters' lives. Carol has a father in rehab, while the unnamed boy narrator of "When in the Dordogne" has parents who have left for France following the father's nervous breakdown and failed suicide attempt. His babysitters are a pair of college boys with whom he has so much more fun than usual that he dreams that his parents will get in a car crash and never return. The protagonists of other stories show King's range, among them a gay man who receives a surprise visit from his homophobic college roommate, a Frenchwoman living in the U.S. whose husband has abruptly moved on, a German woman taking her bratty daughter on holiday to an unpromising inn on the North Sea, a 91-year-old visiting his young granddaughter in the hospital. The final story, "The Man at the Door," about frustrations of the writing process, also tells of its joys: "This morning, however, without warning, a sentence rose, a strange unexpected chain of words meeting the surface in one long gorgeous arc....Words flooded her and her hand ached to keep up with them and above it all her mind was singing here it is here it is and she was smiling."

Full of insights and pleasures.