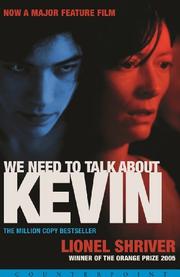 WE NEED TO TALK ABOUT KEVIN

The bad seed/nurture vs. nature theme updated as a teenaged sniper’s mother tries to understand the why behind her son’s criminality, in a series of letters to her not so mysteriously absent husband.

Two years earlier, when he was not quite 16, Kevin Khatchadourian went on a murderous rampage and now lives in a juvenile facility, where his mother Eva visits him regularly if joylessly. Although she has won a civil suit brought by a grieving mother who held her parenting responsible for Kevin’s acts, Eva does not doubt her accountability any more than she doubts Kevin’s guilt. Is she a bad mother? Is he a devil child? The implied answer to both is yes. Eva and her husband Franklin were happily married until she became pregnant in her late 30s. The successful publisher of bohemian travel guides who loves her work, Eva is more ambivalent than Franklin about the prospect of parenthood. When Kevin is born, her lack of instantaneous maternal love is exacerbated by Kevin’s rejection of her breast. The baby shows—or she sees—plenty of early signs that he is “different.” He refuses to talk until he’s three or toilet train until he’s six—a matter of choice, not ability. Babysitters quit; other children fear him. Franklin, a bland, all-American type about whom Eva talks lovingly but condescendingly, notices nothing wrong. He defends Kevin against all accusations. When Eva’s daughter Celia is born, the contrast between the children is startling. Celia is sweet-natured, passive, and a bit dim, and Eva is amazed how naturally she and the girl bond. Meanwhile, Kevin grows into a creepily vicious adolescent whose only hobby is archery. The impending disaster is no surprise despite Shriver’s coyly dropped hints. Eva’s acid social commentary and slightly arch voice only add to the general unpleasantness—which isn’t to say Shriver lacks skill, since unpleasantness appears to be her aim.

Not for the faint-hearted or those contemplating parenthood.