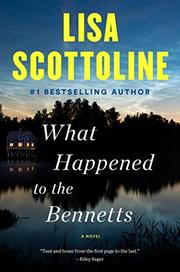 WHAT HAPPENED TO THE BENNETTS

A hypernormal suburban family’s trip home from their daughter’s field hockey game leads them down a rabbit hole of criminal complications.

For some reason—maybe just because it’s a Mercedes—a pair of gunslingers pick court reporter Jason Bennett’s ride to carjack as he drives along a quiet road with his wife, photographer Lucinda, and their teenagers, Allison and Ethan. In the scuffle that follows, one of the carjackers is shot along with Allison, who dies in the hospital. Wait, it gets worse. A pair of FBI agents knocks on the Bennetts’ door at 3 a.m. to tell them that John Milo, the escaped carjacker, has framed Jason for the murder of his accomplice, George Veria Jr., in order to save himself from the wrath of Junior’s father, the kingpin of the George Veria Organization. Time is of the essence, the agents assure Jason and Lucinda: They have to leave their house and their old lives behind right now and go into the witness protection program. Sure enough, minutes after the three shellshocked Bennetts allow themselves to be driven off, a representative of the GVO sets fire to their house and follows up with a similar fire at Jason's office, and Lucinda’s office is vandalized. Warned off social media, the Bennetts can only watch helplessly as their friends and neighbors issue pleas for them to get in touch and self-styled “citizen detective” Bryan Krieger decides to launch his own freelance investigation, fueled by slanderous innuendo. Every time Jason thinks he’s finally got the situation figured out, Scottoline tosses in explosive new complications in the most relentless of all her mysteries.

A high-octane thriller whose hero is tossed into one impossible situation after another. Best started early in the morning.