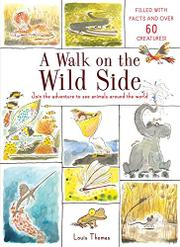 A WALK ON THE WILD SIDE

Filled with Facts and Over 60 Creatures

To meet the animals who live there, a young boy travels to different habitats around the world, including his own backyard.

This appealing imaginary adventure is presented as a scrapbook written and drawn by the narrator, depicted here with short curly black hair and (inconsistently) brown skin, usually a shade darker than that of his human companions. From a European farm to the ocean and its shores, the jungle, deserts, and grasslands, woodlands, and in and around his home, the boy befriends animal inhabitants. (Opposite the title page, a note warns children to "NEVER approach or try to touch an animal in the wild unless a grown-up has said it's safe.") Following the title-page spread, an introduction by the young explorer, and the table of contents, there’s a double-page map of inhabited continents showing the locations of habitats described and some of the animals. The chapters that follow briefly introduce each habitat and animal. A few interesting facts about each of the 60 creatures are included in slightly smaller text. The voice and informational choices are entirely those of a small boy, but the watercolor-and-ink illustrations are clearly done by a talented caricaturist with a cheerful sense of humor. As is too often the case with European imports, no sources are given for the information.

A pleasant if somewhat misleading invitation for armchair and lap-sitting travelers.