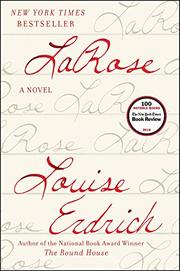 After accidentally shooting his friend and neighbor’s young son, a man on a Native American reservation subscribes to “an old form of justice” by giving his own son, LaRose, to the parents of his victim.

Erdrich, whose last novel, The Round House, won the National Book Award in 2012, sets this meditative, profoundly humane story in the time just before the U.S. invades Iraq but wanders in and out of that moment, even back to origin tales about the beginning of time. On tribal lands in rural North Dakota, the shooter, Landreaux Iron, and his wife, Emmaline, trudge toward their neighbors’ house to say, “Our son will be your son now.” As both families amble through the emotional thickets produced by this act (the wives are half sisters, to boot), Erdrich depicts a tribal culture that is indelible and vibrant: Romeo, a drug-addled grifter still smarting from a years-ago abandonment by his friend Landreaux (and whose hurt makes this novel a revenge story); war vet Father Travis, holy but in love with Emmaline; and LaRose, his father’s “little man, his favorite child,” the fifth generation of LaRoses in his family, who confers with his departed ancestors and summons a deep, preternatural courage to right an injustice done to his new sister. Erdrich’s style is discursive; a long digression about the first LaRose and her darkness haunts this novel. Just when she needs to, though, Erdrich races toward an ending that reads like a thriller as doubts emerge about Landreaux’s intentions the day he went hunting.

Electric, nimble, and perceptive, this novel is about “the phosphorous of grief” but also, more essentially, about the emotions men need, but rarely get, from one another.