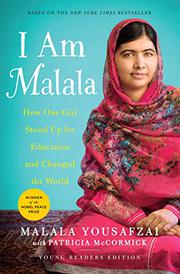 by Malala Yousafzai with Patricia McCormick

Malala Yousafzai, the Pakistani teen shot for her activism for girls’ education, tells her story for a middle-grade audience.

Although billed as a “young readers edition” of Yousafzai’s 2013 book of the same name for adults, co-written with Christina Lamb, the designation does the book a disservice, as this is no simple redaction. With the capable assistance of co-author McCormick, the account has been effectively rewritten specifically for children. The story is straightforward, related chronologically and covering Yousafzai’s growth in activism, her shooting and her recovery in England. Yousafzai’s voice is appealingly youthful, though it often tells rather than shows and frequently goes over the top: In her school, she writes, “we flew on wings of knowledge.” Still, young Western readers will come to understand the gulf that separates them from Yousafzai through carefully chosen anecdotes, helping them see what drives her to such lyrical extremes. Unfortunately, much is lost in the translation from the adult book, presumably sacrificed for brevity and directness; most lamentable is social and political context. Although readers will come away with a good understanding of Yousafzai’s immediate experiences, the geopolitical forces that shape her culture go largely unmentioned except in a closing timeline that amounts to a dizzying list of regime changes.

Though Yousafzai’s memoir never transcends her story, that story is a powerful and inspiring one; supplemented by contextualizing information, it should pack quite a wallop.