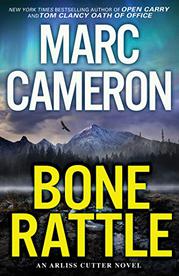 A deputy U.S. marshal stationed in Alaska is challenged by a handful of serious cases and a complicated home life.

When a big archaeological dig grinds to an abrupt halt at the discovery of a rattle that could be worth half a million dollars, the handful of men on hand debate their next move, wary of upsetting their boss, Harold Grimsson, or his dangerous right-hand man, Dollarhyde. Grimsson, who owns the Valkyrie Mine Holdings, is on his private island south of Juneau being warned by two corrupt state senators that he’s in danger of being connected to the criminal Hernandez brothers, currently on trial for financial fraud. Little do the senators know that Grimsson murdered his first wife or that Dollarhyde killed the dig site employee who wanted to halt the operation. While all this is unfolding, Supervisory Deputy U.S. Marshals Arliss Cutter and Lola Teariki are hauling in some grittier perps. Their takedown of drug dealer Jarome Pringle and his stripper girlfriend blossoms into a tense chase and a major bust with several more arrests. Other cops deal with a body on a frigid gravel beach. Cutter’s home life is going through some growing pains. After four marriages, he’s now helping his late brother's widow, Mim, raise snarky twin teenagers and harboring sad memories from his past. Dollarhyde’s thirst for violence seems unquenchable. Cameron’s colorful procedural has epic scope; each change of setting seems to bring a new set of characters and a new subplot with its own wrinkles. Plot threads sprawl and tangle with the abandon of a soap opera. Until the tale settles down to focus on premier villain Grimsson, keeping it all straight is a challenge.