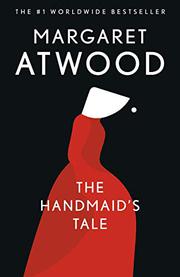 The time is the not-so-distant future, when the US's spiraling social freedoms have finally called down a reaction, an Iranian-style repressive "monotheocracy" calling itself the Republic of Gilead—a Bible-thumping, racist, capital-punishing, and misogynistic rule that would do away with pleasure altogether were it not for one thing: that the Gileadan women, pure and true (as opposed to all the nonbelieving women, those who've ever been adulterous or married more than once), are found rarely fertile.

Thus are drafted a whole class of "handmaids," whose function is to bear the children of the elite, to be fecund or else (else being certain death, sent out to be toxic-waste removers on outlying islands). The narrative frame for Atwood's dystopian vision is the hopeless private testimony of one of these surrogate mothers, Offred ("of" plus the name of her male protector). Lying cradled by the body of the barren wife, being meanwhile serviced by the husband, Offred's "ceremony" must be successful—if she does not want to join the ranks of the other disappeared (which include her mother, her husband—dead—and small daughter, all taken away during the years of revolt). One Of her only human conduits is a gradually developing affair with her master's chauffeur—something that's balanced more than offset, though, by the master's hypocritically un-Puritan use of her as a kind of B-girl at private parties held by the ruling men in a spirit of nostalgia and lust. This latter relationship, edging into real need (the master's), is very effectively done; it highlights the handmaid's (read Everywoman's) eternal exploitation, profane or sacred ("We are two-legged wombs, that's all: sacred vessels, ambulatory chalices"). Atwood, to her credit, creates a chillingly specific, imaginable night-mare. The book is short on characterization—this is Atwood, never a warm writer, at her steeliest—and long on cynicism—it's got none of the human credibility of a work such as Walker Percy's Love In The Ruins. But the scariness is visceral, a world that's like a dangerous and even fatal grid, an electrified fence.