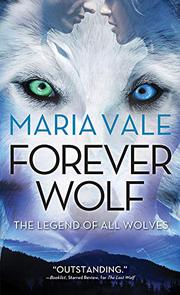 From the Legend of All Wolves series, volume 3

A hardened werewolf must choose between loyalty to her pack or saving the life of a mysterious stranger in this hauntingly beautiful paranormal romance.

Varya Timursdottir is a Shielder for the Great North Pack. She upholds the laws and makes sure all the moving parts are kept going, as she knows firsthand the damage that can be done when a pack’s structure starts to crumble. She wasn’t always a member of the Great North Pack. In fact, Varya is the sole survivor of Pack Vrangelya after they were systemically wiped out. Carrying both the emotional and physical scars of the ordeal, she’s become icy, unmoving, and stern in her role as Shielder and in her dedication to pack law. During a run, she discovers Eyulf, an injured and unconscious man who smells like home, her original home in the Arctic wild. Curious about the man, Varya helps him in secret, but the pair begin to unravel the secrets of Eyulf’s existence. Enmeshed in pack politics, shifting alliances, and threats from humans and Shifters, the Great North Pack enters into an age of uncertainty and possibly war. Varya is torn between upholding her role in the pack and giving in to the feelings stirred by the curious Eyulf. Vale’s (A Wolf Apart, 2018, etc.) latest is lyrical and mesmerizing, the written embodiment of the wild depth where the Great North Pack resides. Each word is carefully selected, and the slightest actions contain deeper meanings in a story that feels expertly crafted in its subtle complexity. Though it's a romance with a bittersweet happily-ever-after that's sure to bring out some tears, the notion of what it means to belong and what Varya will do to help heal her grief-stricken homesickness are rooted at the center of it all.

Prepare to be rendered speechless.