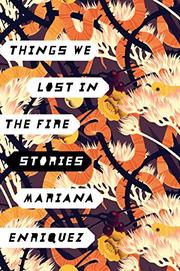 THINGS WE LOST IN THE FIRE

This debut collection by Buenos Aires–based writer Enríquez is staggering in its nuanced ability to throw readers off balance. In the opening story, “The Dirty Kid,” a graphic designer becomes obsessed with a homeless pregnant woman and her son, a mania that worsens when the decapitated body of a child is dumped nearby. The author’s rich descriptions of narcos, addicts, muggers, and transvestites quickly transport readers to an alien world. There are two very different tales of haunted houses in “The Inn,” in which a tourist hotel built on a former police barracks contains forces unknown; and “Adela’s House,” in which the title character steps through a door in an abandoned house—and is never seen again. “The Intoxicated Years” is a sly accounting of five years of increasingly severe drug use among a clique of friends. Then there are the truly monstrous stories that are likely to make readers peek between their fingers. In “No Flesh Over Our Bones,” an anorexic woman anthropomorphizes the human skull she finds in the street. “Vera and I are going to be beautiful and light, nocturnal and earthy; beautiful, the crusts of earth unfolding us. Hollow, dancing skeletons.” In “The Neighbor’s Courtyard,” a depressed woman is convinced a neighbor has chained up a young boy until she’s face to face with the feral, fanged boy, who eats her cat: “Paula didn’t run. She didn’t do anything while the boy devoured the soft parts of the animal, until his teeth hit her spine and he tossed the cadaver into a corner.” Still others reveal hidden humanity. In “End of Term,” two unwell girls find common ground. Finally, the title story chronicles a bit of mass hysteria in which women start self-immolating as a protest against domestic violence.

A rich and malcontent stew of stories about the everyday terrors that wait around each new corner.