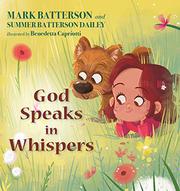 “Where in the world is God’s voice found?” Perhaps in ocean waves, bird song, or mountain vistas, suggest the couplet rhymes. Even when readers might be faced with difficult emotions and distractions of all kinds, the text reassures them that God is still there and still speaking, if only one pauses to listen. His voice can be found in nature, in starlight, in the love of family and friends, in dreams, and “through His Word.” Admirably, the bright illustrations, reminiscent of mid-20th-century Disney artist Mary Blair’s stylings, depict children and families with a diverse array of skin tones and ages. There is also a refreshing mix of urban, suburban, and rural settings. Yet, despite the appealing illustrations, the rhymes and scansion are often forced (“your feelings, they matter, / even if they’re all mixed up like / pancake batter”), which detracts from the overall message. Contrived couplets notwithstanding, this title will likely find an audience among Christian households seeking reassuring bedtime reads.

Though the rhyme tumbles and at times bumbles, enticing imagery will lure readers in.