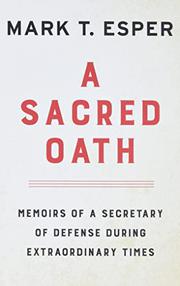 Memoirs of a Secretary of Defense During Extraordinary Times

Donald Trump’s secretary of defense dishes on his dimwitted boss and an army of enablers.

“Can’t you just shoot them? Just shoot them in the legs or something?” As Esper, a West Point graduate and combat veteran, recounts at the opening of this overlong memoir, those were Trump’s words when protestors surrounded the White House in June 2020. It wouldn’t be the only absurd question from Trump, who also asked Esper why they couldn’t launch missiles into Mexico to destroy cartel drug labs. Much of Esper’s work as secretary of the Army and then secretary of defense, to judge by his account, was devoted to trying to explain to Trump and his cronies why they couldn’t do such things thanks to inconvenient obstacles such as the Constitution and international law. Indeed, Esper and Joint Chiefs of Staff chair Mark Milley developed what they called the “Four Nos”: “no unnecessary wars; no strategic retreats; no politicization of the DoD; and no misuse of the military.” The White House seemed bent on breaking each of those rules, as when it demanded politicizing the military by means of a North Korea–worthy triumphant parade and misusing it with plans for martial law and seizing voting machines. Esper’s account could have used some trimming, but he’s rigorously methodical and a capable writer. His explanation of the Alexander Vindman scandal, when Trump pressured Esper to illegally expel a whistleblower from the ranks, is the most thorough in the literature (outside of Vindman’s own memoir). The author takes special pains to show how, over the course of Trump’s four years, competent civil and military servants were forced out and replaced by loyalists; in Trump’s desperate last year, it was nothing short of a purge. Esper ventures that Trump’s instincts were not always wrong, but, as he explains, “the ends he often sought rarely survived the ways and means he typically pursued to accomplish them.”

A damning portrait of a chaotic, inept administration that posed countless dangers to the nation and the world.