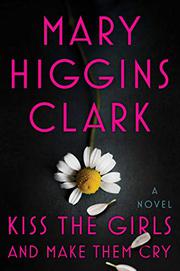 KISS THE GIRLS AND MAKE THEM CRY

The doyenne of damsels in distress enters the brave new world of #MeToo.

Returning from a trip to Hong Kong, investigative journalist Gina Kane is eager to see her boyfriend, banker Ted Wilson, and nearly as eager to hear from CRyan, the mysterious correspondent who’d emailed her about “a terrible experience with one of the higher-ups” at REL News. But Ted has just left on a business trip of his own, and despite Gina’s repeated attempts, CRyan doesn’t reply. By the time Gina has identified her as Catherine Ryan, she’s been killed in a jet ski accident in Aruba. Since Cathy was an old hand at jet skiing whose death seems suspiciously timed, Gina, with the blessing of Geoffrey Whitehurst, the incoming editor at Empire Review, takes off for Aruba, where she satisfies herself that this was no accident. A long flashback to two years earlier shows REL associate producer Lauren Pomerantz reporting to Michael Carter, a lawyer in the news organization’s HR department, that venerable anchor Brad Matthews has harassed her and that she’s gotten some convincing proof that will put paid to he-said, she-said. The next hundred pages mark a notable stretch for Clark (I’ve Got My Eyes on You, 2018, etc.), who clearly relishes the opportunity to show a bunch of high-priced lowlifes—Matthews, Carter, CEO Richard Sherman, and Frederick Carlyle Jr., son and heir apparent to REL’s founder—scrambling to cover up Matthews’ bad behavior without leaving any trace that they’re doing so. Back in the present, Gina leans on enough sources to link Cathy Ryan’s death to Matthews’ serial abuse, but at considerable cost. Her relationship with Ted, who’s helping handle REL’s move to turn itself into a public corporation, is seriously jeopardized by her sleuthing. She can barely spare the time it takes to fly to Buffalo to check out the bona fides of her recently widowed father’s much younger new girlfriend. And savvy readers will realize long before Gina does that one of the conspirators at REL whose wings she plans to clip has ideas about clipping hers first.