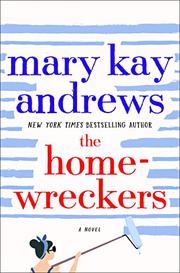 A young Georgia widow flips a historic house and finds evidence of a long-missing woman while developing a growing attraction for a co-worker.

Hattie Kavanaugh married her high school sweetheart and lost him to a motorcycle accident after just a few years of marriage. Almost seven years on, she’s still living in her unfinished bungalow renovation near Savannah, grieving her husband, Hank, and flipping houses with his dad, Tug; her best friend, Cassidy Pelletier; and Cass’ mother, Zenobia. After a disastrous flip where Hattie loses all her savings on a gorgeous—but dilapidated—157-year-old home, Hattie decides to take an offer to star in a Home Place Television Network production with Cass that will bring in a steady paycheck as she works on her next flip and tries to earn back the money she’s lost. The catch—which she doesn’t know but her producer, Mo Lopez, does—is that the show she signed on for has changed in concept from a straight house-flipping show to a house-flip–meets–dating-show, where the goal is for the handsome designer, Trae Bartholomew, to seduce her over the course of the series. Hattie digs deep to fund the flip, pawning her engagement ring and taking a loan from her father, a wealthy ex-felon who has served time in prison for embezzlement. Author Andrews has packed a lot into this story: Not only is there drama from the reality show and Hattie’s growing attraction to a co-worker, but 17 years earlier beloved local schoolteacher Lanier Ragan went missing, and the story follows both the renovation of the long-abandoned beach home Hattie buys and the discovery of evidence in the cold case of the teacher’s disappearance.

A fun story with twists and turns that will appeal to romantics and cold-case fans alike.