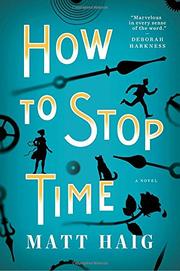 HOW TO STOP TIME

In this new novel by Haig (Reasons to Stay Alive, 2016), a man of extraordinarily long life deals with a painfully ordinary question: what is it we live for?

Tom Hazard, though he has gone by many names, has an unusual condition that makes him age exceptionally slowly—he's more than 400 years old in 2017 but looks a mere 40-something. Tragic events taught him early that his seeming agelessness is a lightning rod for witch hunters and the dangerously suspicious in all eras. For protection, he belongs to the Albatross Society, a secret organization led by Hendrich, an ancient, charismatic man who's highly protective of his members and aggressive about locating and admitting other “albas” into the group. After assisting Hendrich in one such quest, Tom starts a new life in London; he's haunted by memories of his previous life there in the early 1600s, when he had to leave his wife and young child to ensure their safety. He's losing hope that Hendrich will help him find his daughter, who he's learned shares his condition. He muddles through his days until he meets a French teacher who claims she recognizes his face. Unraveling that mystery will lead Tom to re-examine his deeply etched pessimism. Meanwhile, readers are treated to memories of his past, including encounters with Shakespeare, Capt. Cook, and F. Scott and Zelda Fitzgerald. Tom sometimes wallows overmuch about the changelessness of the human condition, and one might be forgiven for wondering why so much time has not done more to heal his oldest wounds. But Haig skillfully enlivens Tom’s history with spare, well-chosen detail, making much of the book transporting.

An engaging story framed by a brooding meditation on time and meaning.