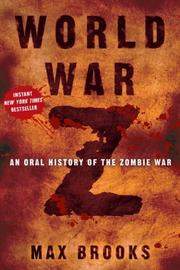 An Oral History of the Zombie War

An “oral history” of the global war the evil brain-chewers came within a hair of winning.

Zombies are among us—turn on your television if you don’t believe it. But, Brooks reassures us in this all-too-realistic novel, even today, human fighters are hunting down the leftovers, and we’re winning. Brooks (The Zombie Survival Guide, not reviewed) seeds his mockumentary with smart nods to the chains of cause and effect that spring from today’s headlines. Like the avian flu, one CIA agent tells the interviewer, the zombie plague began in China, whose government embarked on a campaign of “health and safety” sweeps (“Instead of lying about the sweeps themselves, they just lied about what they were sweeping for”) to contain the endless armies of the moaning, walking dead. It didn’t work. Ear to the ground, Israel quarantined itself—it helped that it had that tall new wall. Greece, Japan, England: Every center of world civilization was overrun, with notable pockets of resistance. In England, for example, the queen stayed in Windsor Castle, the most easily defended bastion in the realm, to steel the hearts of her subjects. Who says the royal family is a relic? Finally, the zombies come to North America, where, after the disastrous Battle of Yonkers, the humans regroup and take their pound of extremely icky flesh in vengeance; even Michael Stipe, the antiwar rock singer, signs up to kick zombie butt. Brooks’s iron-jaw narrative is studded with practical advice on what to do when the zombies come, as they surely will. For one thing, check to see who doesn’t blink (“Maybe because they don’t have as much bodily fluid they can’t keep using it to coat the eyes”), aim for the head and blast away.

A literate, ironic, strangely tasty treat for fans of 28 Days Later, Dawn of the Dead, The Last Man on Earth and other treasures of the zombie/counterzombie genre.