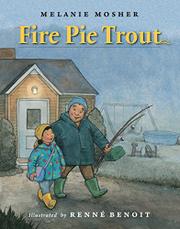 Very early in the morning, Grace and her Gramps pack all their worms and tackle as well as their favorite lunch—fire pie!—and set off through the fog to their favorite fishing spot. The excited Grace actually rolls down the hill to get to the riverbank. She watches Grampie put a worm on his hook, but taking pity on the creature, she “set[s] the wiggler free” and decides to try an empty hook. Gramps catches two big trout as Grace’s line sits undisturbed in the water. She pulls another worm out of her jar but just can’t bring herself to hook it. Maybe she’s too young to go fishing. Then she gets an idea. She breaks off a bit of crust from her fire pie which, for the first time, readers see is leftover pizza. Almost immediately, Grace finds herself in a big tug of war with a speckled trout, and she wins! Joyfully, Grace realizes that she’s not too young for fishing. And Grampie couldn’t be more proud of her. The handsomely designed book has substantial text and nicely composed illustrations. Though it is not an early reader, simple vocabulary, repetition and uncomplicated sentence structure make it a good choice for beginning readers.

Like the story’s heroine, transitioning readers may feel they are taking a step up to big-kid literature. Just so.