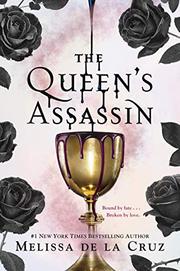 From the Queen's Secret series, volume 1

A young woman, raised in obscurity and trained in magic, rescues a handsome boy and sets off to save her kingdom in this duology opener.

In a kingdom where the only magical knowledge to escape centuries of tyrannical rule belongs to women, Shadow wants to go on adventures. She’s connected to both the palace and the Guild, a group of mostly female magic-wielding assassins and adventurers. Unfortunately, her mother has just recalled her to court, where she’ll be expected to wear fancy gowns and jewels and maybe be married off. Rebellious Shadow runs off to rescue Caledon Holt, the Queen’s Assassin, who is bound to the Queen until he finds the hidden magic scrolls. Chapters alternate between Cal’s and Shadow’s perspectives as the pair reluctantly partner up to infiltrate a neighboring kingdom and root out the conspiracy trying to destroy Renovia. From perpetual frustration to all-in love, this is more about the romance than the world, although the world—with strong women, marriage equality, and characters of varying skin tones—certainly has its strengths, lightly realized though it is. This is a classic plucky heroine fantasy in the vein of Tamora Pierce and Kristin Cashore, with some modern tweaks.