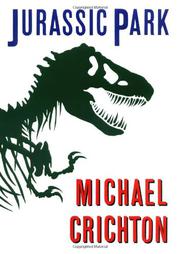 Genetically engineered dinosaurs run amok in Crichton's new, vastly entertaining science thriller. From the introduction alone—a classically Crichton-clear discussion of the implications of biotechnological research—it's evident that the Harvard M.D. has bounced back from the science-fantasy silliness of Sphere (1987) for another taut reworking of the Frankenstein theme, as in The Andromeda Strain and The Terminal Man. Here, Dr. Frankenstein is aging billionaire John Hammond, whose monster is a manmade ecosystem based on a Costa Rican island. Designed as the world's ultimate theme park, the ecosystem boasts climate and flora of the Jurassic Age and—most spectacularly—15 varieties of dinosaurs, created by elaborate genetic engineering that Crichton explains in fascinating detail, rich with dino-lore and complete with graphics. Into the park, for a safety check before its opening, comes the novel's band of characters—who, though well drawn, double as symbolic types in this unsubtle morality play. Among them are hero Alan Grant, noble paleontologist; Hammond, venal and obsessed; amoral dino-designer Henry Wu; Hammond's two innocent grandchildren; and mathematician Ian Malcolm, who in long diatribes serves as Crichton's mouthpiece to lament the folly of science. Upon arrival, the visitors tour the park; meanwhile, an industrial spy steals some dino embryos by shutting down the island's power—and its security grid, allowing the beasts to run loose. The bulk of the remaining narrative consists of dinos—ferocious T. Rex's, voracious velociraptors, venom-spitting dilophosaurs—stalking, ripping, and eating the cast in fast, furious, and suspenseful set-pieces as the ecosystem spins apart. And can Grant prevent the dinos from escaping to the mainland to create unchecked havoc? Though intrusive, the moralizing rarely slows this tornado-paced tale, a slick package of info-thrills that's Crichton's most clever since Congo (1980)—and easily the most exciting dinosaur novel ever written. A sure-fire best-seller.