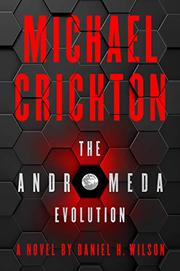 Over 50 years after an extraterrestrial microbe wiped out a small Arizona town, something very strange has appeared in the Amazon jungle in Wilson’s follow-up to Crichton’s The Andromeda Strain.

The microparticle's introduction to Earth in 1967 was the disastrous result of an American weapons research program. Before it could be contained, Andromeda killed all but two people in tiny Piedmont, Arizona; during testing after the disaster, AS-1 evolved and escaped into the atmosphere. Project Eternal Vigilance was quickly set up to scan for any possible new outbreaks of Andromeda. Now, an anomaly with “signature peaks” closely resembling the original Andromeda Strain has been spotted in the heart of the Amazon, and a Wildfire Alert is issued. A diverse team is assembled: Nidhi Vedala, an MIT nanotechnology expert born in a Mumbai slum; Harold Odhiambo, a Kenyan xenogeologist; Peng Wu, a Chinese doctor and taikonaut; Sophie Kline, a paraplegic astronaut and nanorobotics expert based on the International Space Station; and, a last-minute addition, roboticist James Stone, son of Dr. Jeremy Stone from The Andromeda Strain. They must journey into the deepest part of the jungle to study and hopefully contain the dire threat that the anomaly seemingly poses to humanity. But the jungle has its own dangers, and it’s not long before distrust and suspicion grip the team. They’ll need to come together to take on what waits for them inside a mysterious structure that may not be of this world. Setting the story over the course of five days, Wilson (Robopocalypse, 2011, etc.) combines the best elements of hard SF novels and techno-thrillers, using recovered video, audio, and interview transcripts to shape the narrative, with his own robotics expertise adding flavor and heft. Despite a bit of acronym overload, this is an atmospheric and often terrifying roller-coaster ride with (literally) sky-high stakes that pays plenty of homage to The Andromeda Strain while also echoing the spirit and mood of Crichton’s other works, such as Jurassic Park and Congo. Add more than a few twists and exciting set pieces (especially in the finale) to the mix, and you’ve got a winner.

A thrilling and satisfying sequel to the 1969 classic.