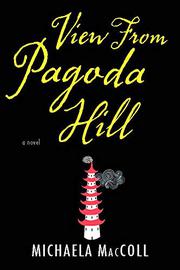 In this story based on the author’s family history, a girl struggles to figure out where she belongs.

Born to a White American father and a Chinese mother, 12-year-old Ning feels out of place in 1878 Shanghai. Her hair is dark brown rather than black, she has green eyes, and her feet are not bound—uncommon given her age and affluent family background—all things that mark her as unattractive. Having never met her father and with her affection rebuffed by her mother, Ning finds friendship and support from Number One Boy, her mother’s servant. When the local matchmaker declares it will be impossible for her to make a decent marriage, Ning’s mother desperately arranges for Ning’s father to come. They agree to send her to live with her grandparents in upstate New York. Once there, Ning, now renamed “Neenah,” struggles with racism, identity, and lacking a sense of belonging. MacColl weaves an intriguing narrative inspired by the life of her great-great-grandmother. However, Chinese cultural cues are filtered through an American perspective, resulting in Ning’s mother’s being portrayed as unfeeling. Shocking and harsh racist remarks and encounters Neenah has in the U.S. are appropriate to the time, but young readers would have benefited from having them explained explicitly.