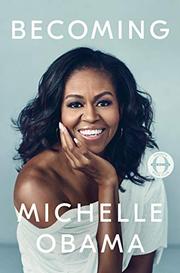 The former first lady opens up about her early life, her journey to the White House, and the eight history-making years that followed.

It’s not surprising that Obama grew up a rambunctious kid with a stubborn streak and an “I’ll show you” attitude. After all, it takes a special kind of moxie to survive being the first African-American FLOTUS—and not only survive, but thrive. For eight years, we witnessed the adversity the first family had to face, and now we get to read what it was really like growing up in a working-class family on Chicago’s South Side and ending up at the world’s most famous address. As the author amply shows, her can-do attitude was daunted at times by racism, leaving her wondering if she was good enough. Nevertheless, she persisted, graduating from Chicago’s first magnet high school, Princeton, and Harvard Law School, and pursuing careers in law and the nonprofit world. With her characteristic candor and dry wit, she recounts the story of her fateful meeting with her future husband. Once they were officially a couple, her feelings for him turned into a “toppling blast of lust, gratitude, fulfillment, wonder.” But for someone with a “natural resistance to chaos,” being the wife of an ambitious politician was no small feat, and becoming a mother along the way added another layer of complexity. Throw a presidential campaign into the mix, and even the most assured woman could begin to crack under the pressure. Later, adjusting to life in the White House was a formidable challenge for the self-described “control freak”—not to mention the difficulty of sparing their daughters the ugly side of politics and preserving their privacy as much as possible. Through it all, Obama remained determined to serve with grace and help others through initiatives like the White House garden and her campaign to fight childhood obesity. And even though she deems herself “not a political person,” she shares frank thoughts about the 2016 election.