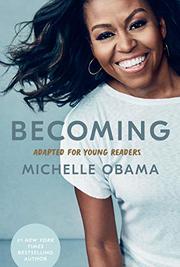 A former first lady shares stories from her life to encourage young readers.

Michelle Robinson was born and raised in a warm and supportive working-class neighborhood in Chicago, Illinois. Despite her father’s diagnosis of multiple sclerosis, he continued working as a city laborer while her mother was a homemaker. Both of her parents were staunch believers in education, providing Michelle and her brother with the support they needed to succeed. After attending a magnet high school, she followed her brother to Princeton before she got a law degree from Harvard. It was while working as a lawyer that she met and mentored Barack Obama, a young man of mixed race whose upbringing was vastly different from her own. Nevertheless, they fell in love, married, became parents, and embarked on a remarkable life of activism and politics, culminating in two historic terms in the White House. This young readers’ adaptation follows a similar format to the enormously successful adult original. Obama does not shy away from describing the insecurities she overcame as she acquired her Ivy League education, nor the difficulties she had with her husband’s choice to pursue politics. Anecdotes about her coming-of-age, experiences on the campaign trail, and life in the White House are compelling. Throughout the lively narrative, she expresses an encouraging tone as she tells her story with accessibility and intimacy.

This warm memoir will connect with young readers and inspire them to value their own stories.