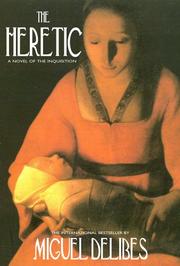 A Novel of the Inquisition

Spanish novelist Delibes (The Wars of Our Ancestors, 1992, etc.) fashions a poignant, although pale and rather bloated encomium to the early Reformation history of his hometown, Valladolid.

In the mid-16th century, this northwestern Castilian city was home to many Protestant dissenters chafing against the strictures of the Inquisition. Delibes’s story concerns Cipriano Salcedo, son of thin-blooded, well-to-do businessman Bernardo Salcedo, and his beautiful wife Catalina, who died after giving birth to her only child. The boy’s early years are hardly noteworthy; indeed, the author devotes more attention to widowed Bernardo’s heated efforts to find a suitable bedfellow, ultimately successful when 15-year-old virgin Petra Gregorio turns out to be a sexual dynamo. Delibes does take a moment to introduce Cipriano’s peasant nurse Minervina, who will play a part in his later history when he is judged a heretic and condemned to burn at the stake. First, however, Cipriano grows up and marries, then experiences the same fertility problem as his father. His wife dies, and Cipriano gradually entangles himself in the secretive local Protestant society led by Doctor Cazalla. Its shadowy adherents believe they are following the clandestine tradition of the apostles and the Christians in the catacombs. At their dangerous meetings, Cipriano learns to accept the Protestant party line: Purgatory doesn’t exist, nuns and priests cannot be held to celibacy, confession should not be spoken aloud. He embarks on perilous journeys as proselytizer, supervising the printing of anti-papal documents and expounding his beliefs at various far-flung convents. In the end, the Holy Office prevails; the heretical society is betrayed by one of its own.