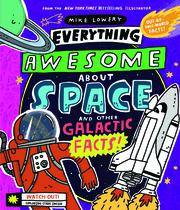 EVERYTHING AWESOME ABOUT SPACE AND OTHER GALACTIC FACTS!

From the Everything Awesome About… series

A charged-up roundup of astro-facts.

Having previously explored everything awesome about both dinosaurs (2019) and sharks (2020), Lowery now heads out along a well-traveled route, taking readers from the Big Bang through a planet-by-planet tour of the solar system and then through a selection of space-exploration highlights. The survey isn’t unique, but Lowery does pour on the gosh-wow by filling each hand-lettered, poster-style spread with emphatic colors and graphics. He also goes for the awesome in his selection of facts—so that readers get nothing about Newton’s laws of motion, for instance, but will come away knowing that just 65 years separate the Wright brothers’ flight and the first moon landing. They’ll also learn that space is silent but smells like burned steak (according to astronaut Chris Hadfield), that thanks to microgravity no one snores on the International Space Station, and that Buzz Aldrin was the first man on the moon…to use the bathroom. And, along with a set of forgettable space jokes (OK, one: “Why did the carnivore eat the shooting star?” “Because it was meteor”), the backmatter features drawing instructions for budding space artists and a short but choice reading list. Nods to Katherine Johnson and NASA’s other African American “computers” as well as astronomer Vera Rubin give women a solid presence in the otherwise male and largely White cast of humans. (This book was reviewed digitally.)

A quick flight but a blast from first to last.