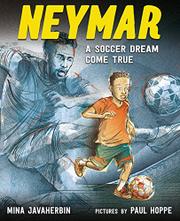 From pretend soccer games with family members in his grandfather’s house to playing for the Brazilian national soccer team, this is the story of Neymar Jr., one of the world’s most valuable players.

From a very young age, Neymar Jr. feels a passion for soccer, a passion exemplified by the numerous soccer games he plays, both indoors with other family members or outdoors with his friends on the lawn, and the fact that he always carries a ball with him, including during family meals. His talent is soon spotted by a friend of the family who takes him under his wing to coach him, and the training finally pays off when Neymar Jr. joins a local team, Santos FC, and plays in the youth league. Neymar Jr.’s brilliance is such that he is invited to a trial with Real Madrid, but the experience is short-lived as he realizes how much he misses his family, his “real joy,” and decides, despite mounting criticism, to return to Brazil. He continues to progress with his team, with whom he wins major titles before finally signing up for European teams. Javaherbin’s free-flowing narrative in Neymar Jr.’s imagined first-person voice, coupled with Hoppe’s evocative, movement-filled illustrations, brings life to this athlete’s biography. A real page-turner, this book couldn’t have been released at a better time, a few months before the 2018 World Cup.