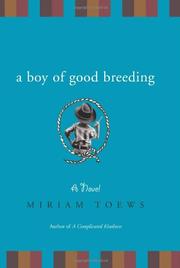 A BOY OF GOOD BREEDING

A charming novel by Canadian author Toews (A Complicated Kindness, 2004) reveals what it’s like to live in the smallest town in Canada.

Hosea Funk is the mayor of Algren, Manitoba, and proud to represent Canada’s smallest town, although (considering the relentless births and deaths) the population is constantly fluctuating. Canada’s prime minister, John Baert, has written a letter to Hosea notifying him of an official congratulatory visit on July 1—as the son of a single teenaged mother who passed off his birth as a miraculous nighttime encounter with a man on a horse, Hosea is convinced that the prime minister is his father and plans to tell him so. Meanwhile, Algren has new residents in the form of 24-year-old single mom Knute and her three-year-old daughter, Summer Feelin’, who has a curious way of flapping her arms like a bird when she’s excited. The childlike mother and daughter are invited back home to stay with Knute’s mother, Dory, who is at her wit’s end taking care of her incommunicative husband, Tom, who’s been debilitated by a stroke. While Hosea is tearing out his hair with news of the birth of Veronica Epp’s triplets, he is also head-over-heels in love with Winnipeg divorcée Lorna Garden, but too emotionally stilted to tell her, and she’s growing restive by their long-distance romance. Also, goodhearted, clueless Hosea offers Knute a sinecure in the mayor’s office, answering phones and smoking cigarettes while perched on the windowsill. Eventually, Summer Feelin’s father—the incorrigible Max, son of the noisy rich alcoholic Combine Jo—comes back to town, and all is soon forgiven since nothing ever changes in this town.