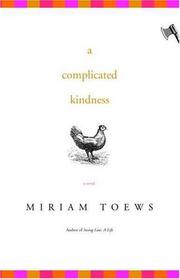 An amusing if somewhat rambling account by Canadian author Toews (Swing Low: A Life, 2001) of a teenaged girl growing up in the middle of nowhere.

All adolescents think they live in the dorkiest place in the world, but 16-year-old Nomi Nickle maybe really does. Her hometown of East Village, Manitoba, you see, is populated almost entirely by Mennonites, an austere Christian sect. East Village has a movie theater but no bars, discos, pool halls, McDonald’s, or Starbucks—and even the theater specializes in films about Menno Simons (who founded the religion and named it after himself). So it’s not really an MTV kind of place. But that doesn’t keep Nomi or her sister Tash from throwing themselves into the usual adolescent cauldron of hormones, scorn, and rebellion. Tash eventually runs away from home with her boyfriend Ian, and Nomi dreams of moving to the real East Village (in New York) and hanging out with Lou Reed. Even Nomi’s mother, Trudie, whose brother Hans (“the mouth”) is the town’s equivalent of the Pope, gets fed up with life among the elect and runs off to parts unknown, leaving Nomi alone with her sweet-hearted but ineffectual and very depressed father, Ray. Nomi copes by ignoring her studies, partying with the other slackers, and hanging out with her boyfriend Travis (who plays guitar and likes to run naked through wheat fields). It’s all on the gloomy side, but, if Nomi is to be believed, that’s what Mennonite life is all about (“A Mennonite telephone survey might consist of questions like, would you prefer to live or die a cruel death, and if you answer ‘live’ the Menno doing the survey hangs up on you”). Still, like any normal teenager, Nomi can’t imagine anything right about her family. Perhaps she’s the one who has the changing to do.

Toews captures the spurts and lurches of adolescent growth in a tale as crude and fresh as its subject matter.