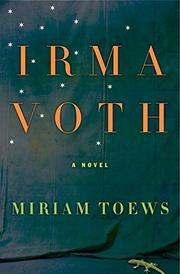 An unworldly Mennonite girl with a tainted past considers a life without the direction of her father, her husband or God, then implements it, in the latest from Canadian writer Toews (The Flying Troutmans, 2008, etc.).

Nineteen-year-old Irma is already breaking away from her Mennonite community in Mexico as the novel opens. Her marriage to Jorge, who is involved in the drug trade, has brought down the wrath of her dictatorial father, and the family chasm only deepens when a film crew arrives and Irma starts working for them as a translator. Irma’s voice—minimal, introverted, bewildered—lends poetic intensity, softened by a tragi-comic edge, to the initially slow-moving story. As tensions rise between the bohemian film crew and the rigid religious community and her marriage disintegrates, Irma plans her escape, accompanied by her 13-year-old sister and, then, at her mother’s behest, the new baby. Now the narrative springs to life as the girls exchange austerity for freedom and friendship in Mexico City, where students help them to settle. Pleasure and creativity enliven them, but past deeds must still be reconciled, a task which Irma eventually begins to tackle.

A literary novel marked by charm, wit and an original approach to language, weakened by polarized characters and a shift from gritty to soft-centered.