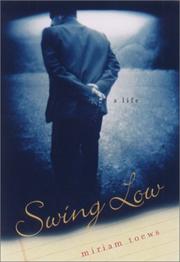 A father’s suicide sets the stage for this wrenching account of a man's lifelong battle with mental illness, creatively written in his voice, as imagined by his daughter.

At the age of 17, Mel Toews was diagnosed as suffering from manic depression, now known as bipolar disorder. Psychiatrists warned him he would not be able to live a normal life, yet despite these warnings, he fell in love, got married, reared two daughters, and taught elementary school for more than 40 years in the small town of Steinbach, Manitoba. Mel's ordered life seemed to be a triumph of spirit and self-discipline, yet he often was unable to function, particularly at home (he didn't utter one sound for an entire year). Finally, after a lifetime of struggle, Mel succumbed to the disease and took his own life. During his last days in the hospital, he asked his daughter Miriam to write down words or sentences he hoped would lead him out of his confusion. It was this glimpse into her father’s troubled mind that led her to write a longer account from his point of view. She shows the progression of Mel's deterioration, skillfully entwining in his words the effect of the illness not only on the individual, but also on his family. In expressive, often unrelentingly painful prose, the narration ranges from choppy thoughts to moving passages: “I was caught in a no man's land, paralyzed in a place that lay somewhere in between my past and my future, unable to move or dream or call out for help, or even die.” Mel’s last words to his daughter: “Nothing accomplished.”

A powerful portrait of a man who, despite all odds, managed to live a normal life.