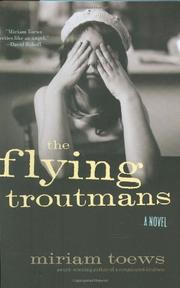 Emulating the comedic stylings of indie hits like Little Miss Sunshine provides a wealth of material and a breath of fresh air for Canadian novelist Toews (A Boy of Good Breeding, 2006, etc).

“Yeah, so things have fallen apart,” declares reluctant narrator Hattie Troutman, summarizing her situation with a postmodern echo of Yeats’ famous lament. Yanked from her Parisian fantasy life as an expatriate living with her leech of a boyfriend, prodigal sibling Hattie rushes home to Manitoba when her sister Min is hospitalized with another catatonic bout, symptomatic of a lifelong mental illness. Hattie is marooned with Min’s 11-year-old daughter Thebes, a goofy smart aleck with a predilection for busting into gangsta rap, and 15-year-old son Logan, a moody renegade who channels his aggression into basketball. Absent of maternal instincts, Hattie decides the best course of action is a road trip to find the kids’ long-absent father, Doug Cherkis. Commandeering a beat-up van, the trio travels through the alien landscapes of Cheyenne, Moab and Twentynine Palms in search of the anarchic artist who reportedly spawned the lesser Troutmans. Life on the road doesn’t increase Hattie’s affection toward her charges. “I thought: Strangle the children, dump their bodies in the ditch,” she notes early in her voyage. With barbed wit, Toews plunders some of the emotional themes from her earlier work, among them absent fathers, the trials of adolescence and the tribulations of single motherhood. The story feels suspiciously directionless much of the time. Fortunately, the snappy personalities of Hattie’s charges and the odd collection of ramblers, Jesus freaks and vagabonds they encounter make for entertaining interludes between the deliciously uncomfortable silences of the book’s primary characters.

Smarter and more thoughtful than its cinematic inspirations.