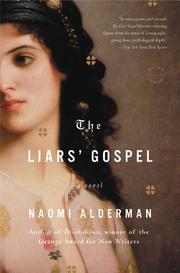 Four narratives set during the time of the ministry, trial and death of Jesus, all involving characters central to the origin of Christianity.

The book opens with the sacrifice of a lamb at the temple and ends with Bar-Avo (Barabbas) cutting the throat of Ananus, the High Priest of the Temple, and “bleed[ing] him like a lamb,” so there’s an obvious symmetry in the narrative arc Alderman sets up. In between these two sacrifices, we learn how the major characters she focuses on relate to the story of Yehoshuah of Nazaret (later Romanized to Jesus of Nazareth, though throughout her re-telling, Alderman uses Hebrew names). The first story is that of Miryam (Mary), mother of a man whose mission she doesn’t understand, and she remains bitter about the loss of her son. Her husband, Yosef, is even more uncomprehending and angry, definitively breaking with his son about a ministry that seems to him idiosyncratic and misguided. The next novella-length narrative introduces us to Iehuda from Qeriot (Judas Iscariot), who, from a later perspective, recounts the “strange tale” of his attachment to Yehoshuah, to the amusement of Calidorus, a Roman merchant, and his guests at a feast. Following Iehuda’s version of events comes that of Caiaphas, a High Priest of the Temple, who tries to resist the pressure of Roman politicians but who ends up turning Yehoshuah over to Pontius Pilate, the Prefect of Judea. The last narrative is that of Bar-Avo, a Jewish revolutionary and assassin who’s caught just before Passover. The rebel band he’s been leading forms a large part of the crowd when Pilate engages in the “Roman sport” of letting the crowd decide who will be released.

Alderman re-creates with startling immediacy the culture of first-century Judea, with its political intrigue and riots and with its characters wondering at what the life of Yehoshuah has meant to them.