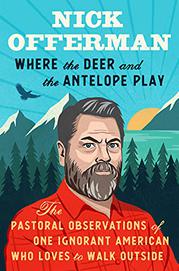 WHERE THE DEER AND THE ANTELOPE PLAY

Offerman opens his latest book, at times reminiscent of the work of British traveler Redmond O’Hanlon, with a gimlet eye on billboards that proclaim the planks of fundamentalist Christianity. “I don’t feel the need,” he writes, “to erect a sign in my yard proclaiming ‘BEEF TALLOW IS THE FUCKING BOSS.’ ” Offerman entertainingly chronicles his travels in the Montana Rockies with two perhaps unlikely companions, novelist George Saunders and musician Jeff Tweedy. Well-known as a fine woodworker, Offerman contrasts his love of fancy gear, a love shared by Tweedy, with Saunders’ asceticism: “It was his water bottle that made me realize how his whole gear vibe was screaming ‘unassuming pragmatism.’ ” Saunders got in a little less trouble than the other two as they hiked along the sheer cliffs of Glacier National Park, a place that prompts the author to meditate on the history and fate of public lands: “We three middle-aged white guys, ever aware of our privilege, had taken pretty full advantage of the recreation available in the glorious acreage that some other white guys had set aside for just that purpose.” After a side journey among craftspeople and farmers in the English Midlands, where he gamely tried to build a stone wall in the old way, he took off on a Covid-evading RV road trip with wife and fellow actor Megan Mullally, a journey fraught with encounters with the denizens of the recent film Nomadland. “When it comes to navigating RV parks and their gatekeepers,” he notes, “there is a substantial culture of unwritten laws of the jungle.” Offerman’s forays into social criticism are sometimes sharp but never elitist even as he professes disdain for the Jan. 6 crowd and its “batshit mouthpiece,” the pillow king.

A hoot and a half for fans of sometimes-hapless wandering.