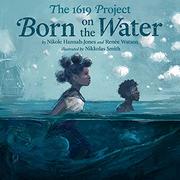 BORN ON THE WATER

A celebration of Black Americans for young readers, derived from Hannah-Jones’ 1619 Project.

Told in a series of poems that create a narrative, the story opens with a young Black girl given a school assignment to trace her ancestry. Despondent, she tells her grandmother about her shame at being unable to complete the assignment. Grandma then tells the story of their ancestors. Refreshingly, that story starts pre-enslavement, in West Central Africa: “Their story does not begin / with whips and chains. / They had a home, a place, a land, / a beginning. / … / Before they were enslaved, they were / free.” Several spreads are dedicated to celebrating the ancestors’ language, skilled hands, sharp minds, joyful hearts, and amazing dancing. When enslavement enters the narrative, authors and illustrator strike a balance between presenting an honest picture and consideration for young readers. Smith’s evocative, vibrant art is full of emotion and motion. Colors and images speak volumes, while characters are portrayed with dignity, even in the worst circumstances. A significant portion of the story focuses on this period and how the ancestors survived and made a home in the United States. Poems “Resistance” and “Legacy” round out the narrative until reaching a conclusion for the character the book opened with in “Pride.” Compression of 400-plus years of history leads to some oversimplification, but overall it is a tremendous achievement.(This book was reviewed digitally.)

A gift to Black Americans and everyone else who reads it.