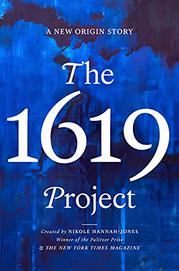 A book-length expansion of the New York Times Magazineissue that explores the history of slavery in America and its countless toxic consequences.

Famously denied tenure at the University of North Carolina for her critical journalism, Hannah-Jones sounds controversial notes at the start: There are no slaves but instead enslaved people, a term that “accurately conveys the condition without stripping the individual of his or her humanity,” while the romantic plantation gives way to the more accurate terms labor camp and forced labor camp. The 1619 Project was intended to introduce Black people into the mainstream narrative of American history as active agents. It may have been White people who enslaved them, but apart from the legal and constitutional paperwork, it was Black people who resisted and liberated themselves and others, from their very first arrival at Jamestown, Virginia, in 1619 to the very present. Hannah-Jones and colleagues consider a nation still wrestling with the outcomes of slavery, an incomplete Reconstruction, and a subsequent history of Jim Crow laws and current legal efforts to disenfranchise Black voters. As she notes, the accompanying backlash has been vigorous, including attempted laws by the likes of Sen. Tom Cotton to strip federal funds from schools that teach the 1619 Project or critical race theory. Among numerous other topics, the narrative examines: the thought that the American independence movement was fueled at least in part by the insistence on maintaining slavery as the Crown moved to abolition; the use of slavery to tamp down resistance among poor Whites whose functions were essentially the same as the enslaved but who, unlike Black people, were not considered property; the ongoing appropriation of Black music, which has “midwifed the only true integration this country has known,” as Wesley Morris writes, by a machine that perpetuates minstrelsy. Those readers open to fresh and startling interpretations of history will find this book a comprehensive education.

A much-needed book that stakes a solid place in a battlefield of ideas over America’s past and present.