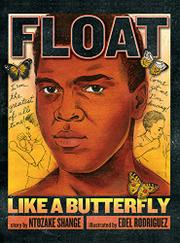 This fervent but sketchy tribute to the world’s best known living athlete gives young readers stylized, spray-painted views of a comic book–style superhero with hugely exaggerated muscles and, generally, an open mouth, paired to eye-glazing captions. “As a boy, he struggled to make his way in the segregated world of the PRE-CIVIL RIGHTS SOUTH.” Shange makes a case for dubbing Ali a “hero for all time,” but aside from a later quote of the subtitle, she mentions his way with rhyme only as a boy, and ends her account of his boxing career with 1974’s “Rumble in the Jungle,” seven years before his last fight. The appended chronology addresses that lack, but skips from 1981 to 1996, and refers to his Parkinson’s Disease without explaining what it is—or its probable cause. Next to the strong prose and evocative art of Walter Dean Myers’s Malcolm X: A Fire Burning Brightly, illustrated by Leonard Jenkins (2000), or the grandeur of Doreen Rappaport’s Martin’s Big Words, illustrated by Brian Collier (2001), this portrait of a widely admired African-American comes off as more strident than inspirational. (Picture book/biography. 7-9)