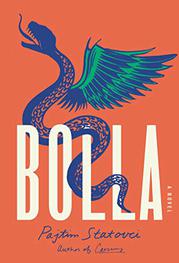 Two men fall for each other in the wrong place at the wrong time in this bleak tale of love and war.

The third novel by the Kosovo-born Finnish novelist Statovci is structured around the alternating narratives of Arsim, a closeted gay man and aspiring Albanian writer, and Miloš, a medical student. Arsim is in emotional retreat twice over, entering a loveless marriage to hide his homosexuality and treading carefully in Pristina, Kosovo, where he’s an “Albanian in a world run by Serbs.” His furtive relationship with Miloš is exhilarating but short-lived: It’s 1995, and the Bosnian War soon sends Miloš to the front and Arsim to exile in an unnamed city. As the story follows the two into the 21st century, each has suffered badly, and an attempt at reconnection only reveals the depth of the damage. Miloš’ chapters are briefer and more impressionistic, suffused with horrific memories of war’s carnage. (“I have held a friend’s heart in the palm of my hand.”) Arsim’s chapters are more straightforward, but though his PTSD is less acute, he’s still suffused with fear, repression, and anger. He is routinely abusive toward his wife, Ajshe, and their children and makes a series of poor decisions that further sabotage his well-being. Statovci lets little sunlight into the narrative, the better to emphasize just how powerful homophobia and self-loathing can be, and Arsim is deeply unlikable; “may the Devil eat you,” Ajshe spits at him, and he deserves that world-class insult. But he comes undone in engrossing and complicated ways. Indeed, he’s so well drawn that Miloš’ portion of the narrative, however graceful, feels disproportionately thin. From either perspective, though, the mood is profoundly sorrowful.

An unflinching consideration of the long aftereffects of an affair cut short.