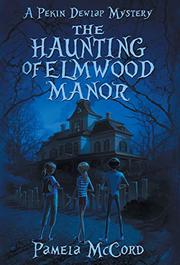 THE HAUNTING OF ELMWOOD MANOR

From the Pekin Dewlap series, volume 1

A debut YA novel features the message that ghosts have problems too.

In this series opener, McCord introduces a feisty protagonist. Pekin Dewlap, 15, is starting her own ghost-hunting business and plans to draft her best friends, Amber and Scout, for this venture. She has chosen to clean up haunted houses because, up until middle school, she was able to communicate with spirits. As she explains to her mother, Melissa, who used to have that same ability, “I want to be special again.” Pekin already has a client, Elonia Collins, who says the property she inherited at 12 Elmwood is haunted. Elonia suspects the apparition is Miranda Talbert, who was 14 when she disappeared in the house in 1918. Pekin, accompanied by her two reluctant friends, encounters Miranda on her first visit to Elmwood Manor. After Miranda gets comfortable with the trio, she admits she was murdered. During the attack, Miranda bit off and swallowed one of the killer’s fingers, keeping him from crossing over when he died. Since then, the culprit, imprisoned at Elmwood Manor, has been tormenting Miranda. So the three friends, aided by local psychic Mildred “Mildew” Willingham, must determine how to banish the killer and help Miranda find peace. In this novel, McCord certainly knows how to reach her target audience. Pekin is dealing with emotional changes in her life, including a growing attraction to Scout. In her thoughts, Pekin debates whether he really likes her. Amber is even more boy crazy while Scout is sometimes a typical, monosyllabic male teen when expressing his feelings. But, while acknowledging the teens’ daily struggles, this volume is primarily about solving the mystery. Pekin and company get away with pluck and ingenuity for a time, finally gathering enough knowledge to put them in danger. When the three friends inevitably get in over their heads, they wisely seek help from the adults in their lives, especially Mildew. What results is a winning, lighthearted paranormal tale for all ages.